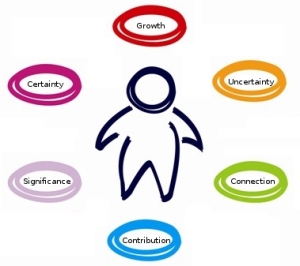 In the process of trying to understand why anyone would want to do something that goes so against the basic design and instinct for survival, I came across this article by Tony Robbins, a well known inspirational speaker and much more who describes the things that make us tick in terms of 6 human needs. Each one of these has an empowering and a disempowering expression as explained in the article.

Then I stumbled upon a TED talk by Mark Henick, a brave young man who talks about his personal experiences with mental ill health and suicidal attempts from a very young age. He makes a point that suicide is not ‘committed’ (unlike rape and murder that are) ever since it was decriminalized many decades ago. He talks about having a ‘collapsed’, ‘limited’ and ‘shrunken’ perception ‘squeezing out that instinctual hope’ which makes one think that there are no choices except suicide. The most attractive thing about this particular choice being – Certainty, being in control of your life and knowing that this will definitely be the end of a miserable existence.

To end one’s life to have certainty – what a contradiction!