More than 30,000 people die of firearms in the USA every year. More than half of these are suicides.

“Suicide by firearm is far more common than homicide,” says Garen J. Wintemute, professor of emergency medicine and director of the Violence Prevention Research Program at UC Davis. “Over the past 30 years, firearm suicides have exceeded homicides even when homicide rates were at their highest in the late 1980s and early 1990s. But, since 2006, the gap between the two has been widening, with firearm homicides decreasing and suicides increasing.”

Suicide is the second most common cause of death in the 15-34 years of age bracket in the US. The majority of these are gun suicides possibly because:

1) Guns are more lethal than most other methods people try, so someone who attempts suicide another way is more likely to survive

2) Studies suggest that suicide attempts often occur shortly after people decide to kill themselves, so people with deadly means at hand when the impulse strikes are more likely to use them than those who have to wait or plan. 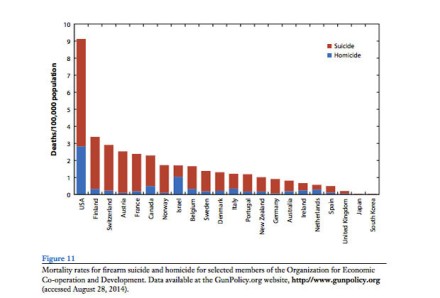 School of Public health at Harvard says that:
1. Access to firearms is a risk factor for suicide
2. Firearms used in youth suicide usually belong to a parent
3. Reducing access to lethal means saves lives

It is obvious that gun laws (or lack of them) in the USA have a direct bearing on this.
Good luck Mr President. You can see the problem clearly but I hope you will be able to do something about it before it is too late for some.