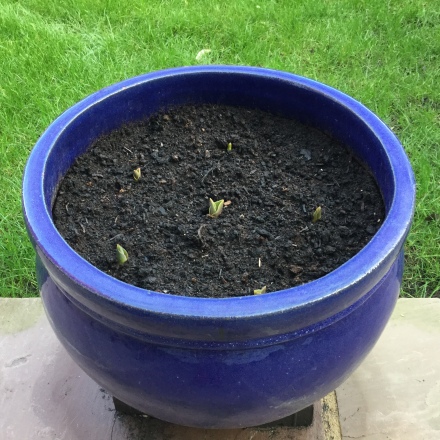 Last year Si brought back a large packet of tulip bulbs from Amsterdam. Special pots were bought, gravel and compost lovingly layered, appropriate spots chosen. The planting happened at the end of December last year. Si and I have fingers of all colours except green. So, we waited for absolutely nothing to happen but to our utter delight, little shoots appeared last week.

The days are longer. The air is lighter. The light is brighter. One season has gone making way for another. Daffodils are raising their pretty heads and trees are sprinkled with white and pink blossom. Meteorolists worry and blame global warming for an early spring but I am happy. After many months of being cooped up in a cup-board, a blue linen dress found its way out into the fresh air this morning. First one this year!

Today is the 20th anniversary of PAPYRUS. We celebrated it as a group of 80-90, discussing the past, present and future of the charity, extending support to each other and sharing ideas about increasing the reach and impact of the work we do. For me, it was a day of hope.

“If I knew to convert
even this day’s riches?
Be content with articulation
Of Earth’s wisdom:
One state must have its duration;
Produces from itself a second;
One state and then another
Leading to an end I cannot presuppose.”