(The Attic, by William de Kooning)

In the 1920s, a Russian film director, Lev Kuleshov filmed a male matinee idol staring in turn at a bowl of soup, a young girl in a coffin and an elegant lady reclining on a couch. The actor got rave reviews from the audiences on his ability to effortlessly evoke hunger, grief and desire in the film. What they did not know was the fact that the director had used the same shot of the actor each time, just cut to each different object.

In the mid-twentieth century, Wiiliam de Kooning emerged as one of the pioneers of Abstract Expressionism. His art is known to put brains in a tizzy, desperately trying to order and make sense of the shapes within. Faces? Animals? Semi-clad human forms? Women? Doors? 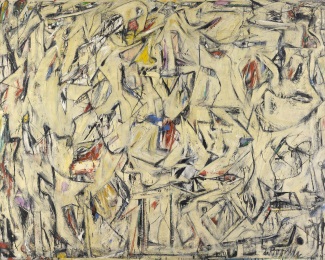 (The Excavation, by William de Kooning)

Maybe life is the same – unrelated images randomly juxtaposed, the human mind desperately struggling to make sense of them.