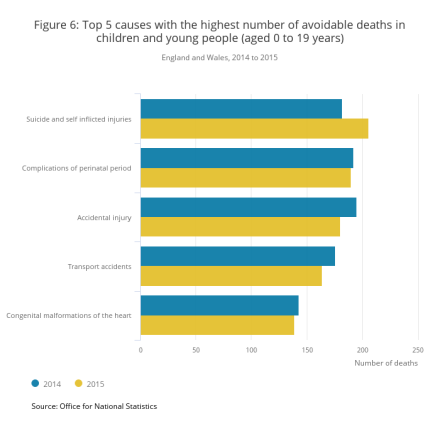 The Office of National Statistics published a report in 2015 saying that the  single cause with the highest number of avoidable deaths in children and young people was suicide and self-inflicted injuries (14% or 206 deaths of all avoidable deaths in this age group).

Of the top five causes of avoidable deaths among children and young people, suicide and self- inflicted injuries was the only cause to see an increase since 2014 by 13% or 24 deaths.

The other top causes each saw a decline since 2014, with accidental injuries, which was the leading cause in 2014, experiencing the largest decline of 8% or 15 deaths.