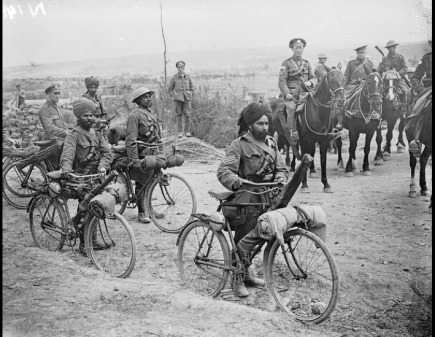 Six years ago, Remembrance Sunday fell on the 11th of November. Same as today. I was visiting Saagar in Durham that weekend and had the privilege of attending the special Sunday service at the ancient, opulent Durham Cathedral. The music and words were deeply moving. I felt lucky to have found a spot to stand at the back of the cathedral that day. I met up with Saagar afterwards and we went for a long walk, lunch and then we had a hot chocolate at the Railway station before my return.

I was surprised to find that over a million Indian soldiers fought in WW1 at Somme, France. At least 74,187 Indian soldiers died and 67,000 were wounded during the war. We rightly remember and honour those who lost their lives serving their country. But do we learn from history?

Northern Europeans have mass murdered indigenous people of entire continents, now Australia and USA, diminishing their numbers to tiny percentages. Then they funded scholars to write books to justify these acts of violence against innocents. Today, I remember and honour all those people who died defending their right to exist.

India was known as ‘the golden bird’ before the Empire established itself in that country. After years of exploitation and oppression they left behind a shattered subcontinent. A fractured country. 14 million people were displaced and several hundred thousand lost their lives as a result.  I salute all those innocents who died for no fault of their own.

“What do you think of western civilisation?”, someone asked Mahatma Gandhi.

He replied, “That would be a good idea.”

We continue to make war in the name of peace. We spend millions on finding more deadly and cowardly ways of killing people. We never forget the 3000 people who died in America on 9/11 but we don’t remember the 500 that have been dying every week in Syria for the last 7 years and in Yemen for the last four. Before that, in Afghanistan and Iraq. All, for peace and liberty. Today, I remember all people, everywhere who have been traumatised and displaced by war and those who have died violent deaths as a result of war. May humankind learn to be kind.

An excerpt from the hymn ‘Hope for the world’s despair’ by Ally Barrett:

Love for the human heart:
when hate grows from our fears
and inwardly we start
to turn our ploughs to spears.
Help us to sow
love’s precious seed
in word and deed,
that peace may grow.

4 thoughts on “Remembering. Not learning.”