“You are well enough to safely go home now”, said the panel.
“But I can’t! I need one more day to complete my church!”, said Di, who was being treated at Bexley hospital for Postnatal Depression in 1966. She had a brilliant occupational therapist who took them to the swimming pool, organised hair-dressing days and helped patients to make things. Di made a church with bits of shattered wind-screen glass, put together with resin but the spire wasn’t on yet. This beautifully tactile piece of art was named ‘Faith’ by Ruth, her daughter.

Ruth was a talented young lawyer. She was an actor and singer. She was kind, generous and gorgeous! She travelled extensively. She was diagnosed with Bipolar Disorder in her late 20s. She coped well with the help of health services, her friends and family but tragically lost her battle at the age of 47.

Di is in her second year of missing Ruth terribly. She has created the most beautiful garden in her memory. Some of the plants there are from Ruth’s house. Her mediterranean wall is stunning. 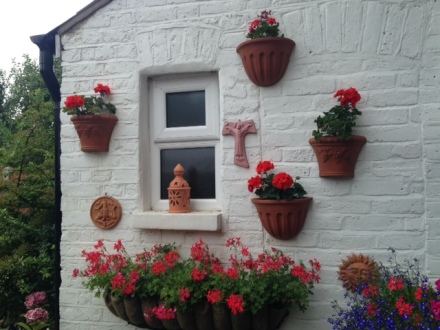 Being bereaved by suicide is a huge risk factor for suicide. Around 125 youth suicides a year occur soon after the person involved has experienced a bereavement. One in four (25%) of under-20s and 28% of 20 to 24-year-olds had lost a relative, partner, friend or acquaintance around a year or more beforehand. In 11% of suicides among under-20s, the person who those involved had lost had also taken their own life.

In a recent inquiry, bereavement was found to be an important theme in many deaths, said Prof Louis Appleby, the director.

People who have been bereaved need greater support to reduce the risk of them killing themselves. Agencies who are meant to help are not good at recognising this risk and need to improve.

This morning I caught up with Di over a cup of tea. We both believe that if Saagar and Ruth have met each other wherever they are, they must get on famously. The link below is a conversation with Di. She talks about her insights on mental health services over 5 decades. Thanks a lot Di!