Professor Guy Goodwin, the main author of the third and latest revision of the BAP Bipolar Guidelines said in his e-mail accompanying the publication:

“The third revision of the British Association of Psychopharmacology (BAP) Bipolar guideline is now available. It is substantially revised from last time to reflect changes in the available evidence, obviously, but also a changing perspective on how to weigh the evidence. It is intended to provide a counterbalance to the NICE document of 2014 which in places shows partiality (to psychological treatments) and a lack of common sense. The authors hope that the BAP revision will be useful in guiding and improving treatment of what remains a curiously neglected disorder. 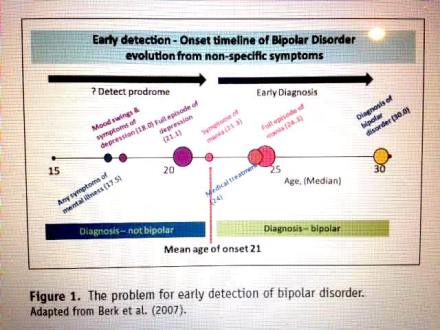 The BAP Guidelines for Bipolar Disorder is a 59 page document. The above picture is on page 20. It is a clear depiction of the evolution of the disease and elicits a ‘full episode of depression’ at the age of 20 years and a few months which was exactly the age Saagar was when he had the full episode of depression – 20 years, 5 months and 10 days. Yet he was discharged to the GP without highlighting the possibility of this happening and all the doors to access specialist services were closed behind him.

On page 23, it goes on to say – “Premature discharge to primary care can further dilute the treatment package available in the early stages of managing the illness.”

He was discharged by the Psychiatrist to the GP after 20 days of having made the diagnosis of Bipolar Disorder.

What more can I say? Poor kid!