A survey of 500 people revealed that a third of people didn’t feel comfortable at all talking to someone at work about mental health related issues and only 15% have had a colleague speak to them about their mental health.

The survey also uncovered an interesting trend: nearly a third of all male respondents have never had a friend, family member or colleague speak to them about their mental health. Worryingly, this statistic rises to 42% for males aged 45 and over and increases yet again to 60% for males aged 54 and over. 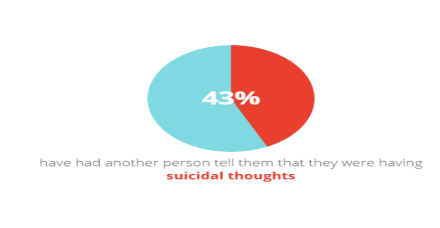 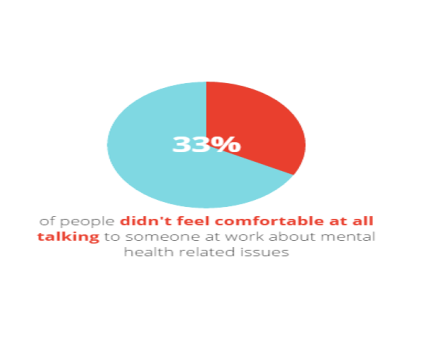 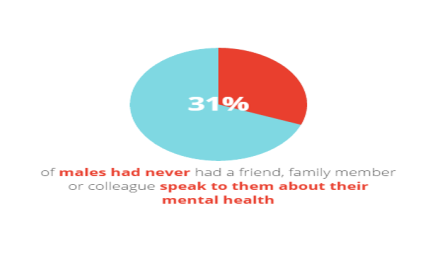 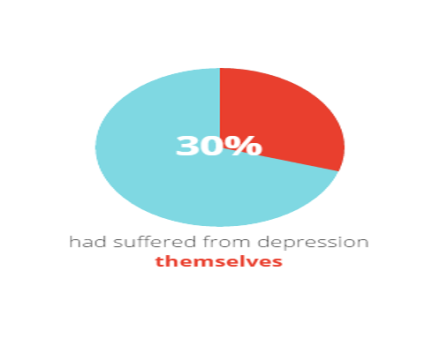 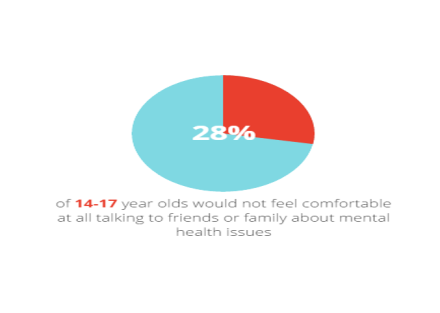 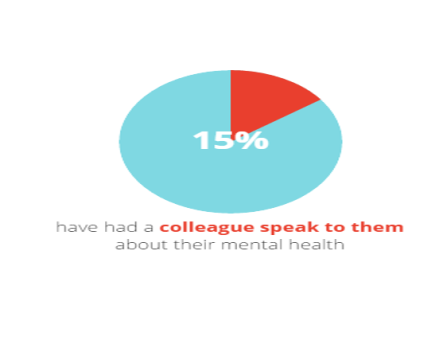 Prevention starts with a conversation.

In one month it will be 2 years since Saagar’s time on this planet came to an end. I don’t want that date to arrive. I am absolutely dreading it. I remember when Saagar was coming close to finishing school, the thought of him going off to university made me feel terribly sad, almost panicked, knowing it was bound to happen. It’s the same feeling, only different. Another year! Another slot of time. A longer gap between him and me, more distance between the time when he lived and now. More fade. More erosion.

This evening we attended a unique black-tie event – a dinner/dance to honour and celebrate Ruth’s life. She was only 44 when she got tired of her Bipolar Disorder. She had suffered with it for most of her adult life. Her friends and family got together and had a great big fun party for her. It was a happy event. I have never met Ruth but her Mum and I have a unique bond. It felt special to be there with Si and my parents. I felt deep gratitude for all these lovely people in my life. All the proceeds went to the charity Mind.

The same adjectives I use to describe Saagar were used  to describe Ruth. She was actively involved in amateur theatre and her gorgeous photographs from various productions were displayed for our pleasure – Kismet, Sweet Charity, South Pacific and Oliver. Her twinkling eyes and cheeky smile sparkled through every photograph.

“Mem’ries light the corners of my mind
Misty water-colour mem’ries of the way we were
Scatterred pictures of the smiles we left behind
Smiles we gave to one another for the way we were
Can it be that it was all so simple then
Or has time re-written ev’ry line?
If we had the chance to do it all again
Tell me, would we? Could we?
Mem’ries may be beautiful yet
What’s too painful to remember
We simply choose to forget
So it’s the laughter we will remember
Whenever we remember
The way we were… the way we were…” 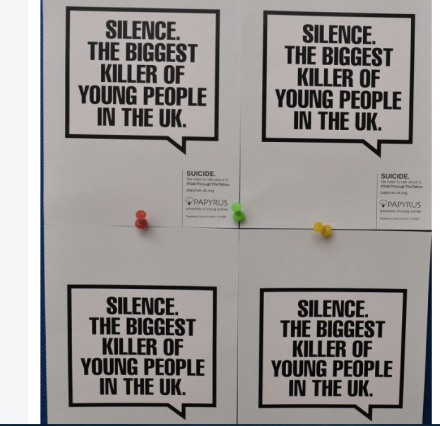 A snippet from life of a Helpline call centre:

11.51: Bullies at school are telling the next female caller to take her own life. She’s upset and agitated and feels anxious about talking to her parents or GP. After talking through the issues, she says she’s not in immediate danger and will try to talk to her parents and seek support from her GP or the charity if she feels it necessary.

13.49: A mother calls about her son who is struggling at university and has told her he may as well not be alive. She is worried he might be suicidal.

The adviser talks to her for half an hour about asking her son directly about suicide and discusses what other support he may need, including talking to his GP and giving him the HOPELineUK details. Afterwards, the mum says she is more confident about speaking to her son.

18.32: With the suicide prevention advisers on calls, a voicemail is left by a young man. He calls back eight minutes later and starts apologising for calling the helpline.

He’s made plans to take his own life today and despite calling his mental health team and telling them he’s suicidal, he’s still waiting for his case worker to call back.

After 42 minutes on the phone with the helpline suicide prevention adviser, he’s much calmer and says he won’t take his own life today.

18.53: A young transitioning transgender person calls, admitting she’s feeling suicidal today. She spends 23 minutes talking through her issues with a suicide prevention adviser who works with her on a plan to stay safe over the coming hours and signposts her to support networks she may find helpful.

19.38: A text comes in from a young father who says he’s feeling suicidal. He suffered domestic abuse as a child and, as a result of alcohol and drug addiction, has lost contact rights with his own children. He says he has his suicide method in front of him and is intending to end his life.

About 5 months after Saagar’s passing, one of my close friends sent me a subtle message suggesting that I should be careful about what I write in my blog as a few of my work colleagues read it regularly and if I appear to be too fragile or vulnerable, it might have a negative impact on my professional life. I understood her concern. The medical profession is not known for its understanding and compassion for mental frailty in colleagues.

Dr Wendy Potts was a GP in Derbyshire who blogged about living with Bipolar Disorder on a regular basis. One of her patients read the blog and complained to her Practise. The doctor was suspended. A few weeks later she ended her own life.

Firstly, I don’t understand the basis of the complaint. Would patients complain if their GP had diabetes or cancer?

Secondly, I don’t understand the basis for suspension from work. If the doctor’s performance was not questionable, then there is no ground for that.

This is one of many examples of poor treatment of medical colleagues with mental health issues. I think we are a long way from seeing parity between physical and mental illnesses as the ones who are supposed to put that into practise are themselves caught in the stigma associated with mental illness.

(PS: apologies for not being able to insert the link to the article in a better way. The ‘link’ icon on my page doesn’t seem to work anymore. Any ideas? )

It was on the 21st of August two years ago that Saagar was officially diagnosed with Bipolar Disorder by an Honorary Consultant Psychiatrist. He was the only one in the family who was informed of it. I wonder how it made him feel. I wonder if he felt weird, confused, traumatised or all of the above. I wonder if it made him question who he was and what this means in terms of his future. I wonder what it did to his self-esteem and confidence. I bet it was scary. I am sure he looked it up on the net. He handled it very well. He made no big deal of it. He took his medicines, did not drink or go out too much, he waited patiently for the medicines to work and they did. He got better for a bit but then…

In 8 weeks time he will be dead. I didn’t know it then. I know it now and it kills me.

Right now I can see that this present moment is inevitable. It is here in front of me and all I can do is honour it.

The stress vulnerability model was proposed by Zubin and Spring (1977). It proposes that an individual has unique biological, psychological and social elements. These elements include strengths and vulnerabilities for dealing with stress.

In the diagram above person “a” has a very low vulnerability and consequently can withstand a huge amount of stress, however solitary confinement may stress the person so much that they experience psychotic symptoms. This is seen as a “normal” reaction. Person “b” in the diagram has a higher vulnerability, due to genetic predisposition for example. Person “c” also has genetic loading but also suffered the loss of mother before the age of 11 and was traumatically abused. Therefore persons “a” and “b” take more stress to become “ill”.

This model is obviously simplistic. However it does help with the understanding of psychosis. Vulnerability is not a judgmental term but a different way to approach the variables involved. We all have a different capacity to take on stress depending on how vulnerable we are. At different times in our lives we can be anywhere on the curve, depending on these variables.
Increasing coping skills or altering environmental factors (family, work, finance, housing etc.) and specialist help can reduce vulnerability and build resilience. Attending a peer group may help to build self-efficacy, self-esteem and self-acceptance all of which may be protective against relapse and form a buffer to demoralisation. It gives hope!

A brain surgeon, Paul Kalanithi got diagnosed with terminal lung cancer at the age of 36. Suddenly he found himself on the other side of the table. He wrote a ‘rattling, heartbreaking, beautiful’ book about his life as a doctor and then as a patient before he died. It is called “When breath becomes air’. In it he tactfully dissects the walls that exist between doctors and patients. Having found myself on either side of the table – first as a physician and then as the mother of a severely ill child, I can completely relate with this excerpt below.

“The reason doctors don’t give patients specific prognoses is not merely because they cannot. Certainly, if a patient’s expectations are way out of the bounds of probability – someone expecting to live to 130, say, or someone thinking his benign skin spots are signs of imminent death – doctors are entrusted to bring that person’s expectations into the realm of reasonable possibility. What patients seek is not scientific knowledge that doctors hide but existential authenticity each person must find his or her own. Getting too deeply into statistics is like trying to quench a thirst with salty water. The angst of facing mortality has no remedy in probability.”

“I had to face my mortality and try to understand what made my life worth living and I needed Emma’s (my doctor’s) help to do so. Torn between being a doctor and being a patient, delving into medical science and turning back to literature for answers, I struggled, while facing my own death to rebuild my own life – or perhaps find a new one.”

I cannot imagine what one’s options would be when diagnosed with a severe/ terminal mental illness. Saagar was unable to access his own life as he knew it and perhaps chose to find a new one.