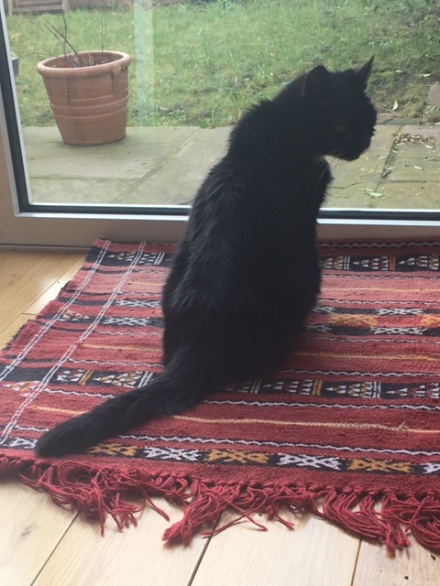 He came to us as a little girl in 2004, from Antrim Animal Sactuary. We called him ‘Bella’ for a week before the vet told us he was a little boy. One of his ears had a wedge missing, a sign of having lived rough. That didn’t take his sweetness away. He jumped to the top of kitchen cabinets and mewed in protest for being locked up indoors. He loved being outside in the sun, watching the world go by and making friends with it. He played with anything – hair, wool, food, the mint plant, newspapers, laptops. He brought a light and joyful energy into our house.

He slept under my bed and some mornings I woke up, looking straight into his eyes. We had long conversations where each of us listened and allowed a gap after the other finished their sentence before starting to speak. Saagar was endlessly amused by this intimate interaction beyond language, where everything was being expressed and understood. In the evening, while I sat watching TV, Mr Bronx sat watching me.

Stroking him saved my life. He received love generously. That alone was enough.

He happily adopted the neighbours by pretending he wasn’t being fed at home. One day I found a note through my door. ‘Please feed your cat’ it said. Later I also found out that one of my lovely neighbours had set up a Facebook page to find support for this poor black and white cat on his street! Thank you, Bronx!!!

A few months ago the vet said that his thyroid and kidneys were not working very well. She put him on a special diet and some meds. We ran some blood tests, which indicated that he was slowly approaching the end of his life. So, we made the most of our time together, playing and eating and a lot of loving. Si found out Mr Bronx loved organic chicken. He treated him and himself to it often.

Last Friday Mr Bronx got a bit wobbly on his feet. On Saturday, all he wanted was to lie down. We spent the whole day together in the sun, listening to music and Radio 4, saying hello to passers-by and talking. That night he peacefully slipped away in his sleep. He now rests in his favourite place, our garden. Love you, Mr Bronx. Thank you.