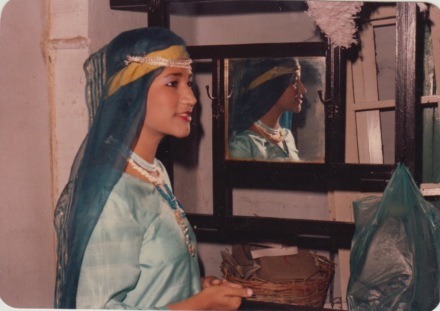 Once upon a time I used to be a kid. A bright and happy kid. I nearly forgot that girl. She used to be fun. She loved singing, dancing and play-acting. She had thick black, unusually curly, short hair. She laughed easily and played harmless pranks. She listened to music on the radio with such ardour that her day was planned around the timings of her favourite programmes on the Urdu service of All India Radio. The last few pages of all her notebooks were filled with scribbled lyrics of songs written at speed to keep pace with them as they played on the old Murphy which was a part of her mother’s dowry. Then she neatly transcribed the messy song-words from the back pages of her notebooks onto a special red diary which was her treasure.

A few months back I accepted an invitation from my alma mater, Christian Medical College, Ludhiana, India.  This is where I trained to be a doctor and an anaesthetist, nearly 30 years ago. They requested me to run a Mental Health workshop for about 70 medical students and make a Keynote address at the World Junior Medical Congress they were hosting in early April.

While preparing my lecture, I dug up a few old pictures. They flew me back in time. I saw what I looked like when I was Saagar’s age. It was a strange juxtaposition. So much had changed. Oh, that heart-breaking innocence! The stars in my eyes shone so bright, they nearly blinded me. Who was this lovely girl? Where is she now? She has walked a long way and formed a big circle. She is back where she started, working with what she has – her Love, her Grief and her Self.

The workshop was four and a half hours long. The sharing was powerful, the enthusiasm infectious. The learning for all of us was invaluable. It was fun! We sang and we danced. We worked and we played. It was just like the old times. Saagar was there. He was smiling his crooked smile.

“There is nothing in the world, I venture to say, that would so effectively help one to survive even the worst conditions as the knowledge that there is a meaning in one’s life.” – Victor Frankl.