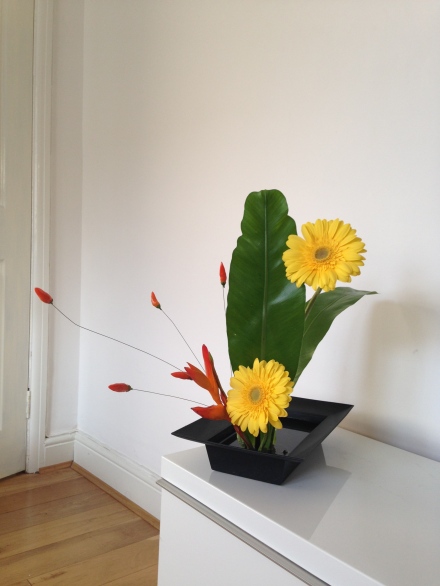 Ikebana is the ancient Japanese art of flower arranging in practice for the last 600 years. It developed from the Buddhist ritual of offering flowers to the spirits of the dead. By the middle of the fifteenth century, with the emergence of the first classical styles, ikebana achieved the status of an art form independent of its religious origins, though it continued to retain strong symbolic and philosophical overtones.

In 2012 Saagar left home for university, about 5 hours away. I missed him so much that I avoided coming home in the evenings. After attending an Ikebana exhibition and a few demonstrations, I was enamoured by the beauty and creativity in those arrangements. I started taking lessons in Ikebana once a week. The classes were held in the evening. They brought me close to the smells and textures of various kinds of fresh flowers and foliage. I learnt some lovely musical names like Lisianthus and Zantedeschia. I also learnt to match them with their faces. I could now appreciate the depth of the redness of dogwood and the palpable tenderness of rose buds. It was a whole new world of shapes, materials, colours, techniques, spaces and movements. It was meditative in its own serene way. A couple of hours went by in the blink of an eye.

After a gap of nearly 18 months, I restarted the lessons last week. It is heart warming to be reunited with old friends.