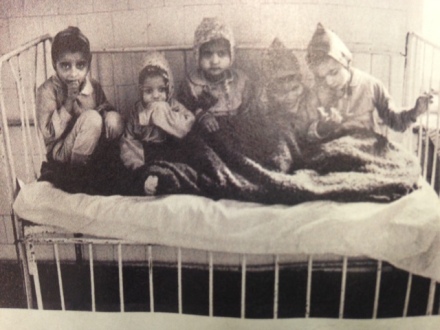 “Terrible poverty causes brain damage”, says Charles Nelson, a professor of neuroscience and paediatrics at Harvard Medical School.
In 1989, when the communists were overthrown in Romania, 170,000 children were abandoned and were living in government-run institutions under very poor conditions. Nelson and his team started studying them in the late 1990s. They found that the kids were deprived of key experiences during critical periods of development. Babies lay in cribs for their first year or more and their visual experience was limited because often the ceilings were painted white. There was no one to talk to them and care-giving was limited, so they were deprived of psychosocial stimulation. Their physical growth was greatly stunted too. The kids were very very small.

“We had a rule: no crying in front of the kids. But I can’t tell you how tough it was.”
The team wanted to find out if high-quality foster care for these kids could rectify the negative impact of poverty they might have. They recruited a sample of 136 kids, from 6-31 months of age and randomly assigned half of them to high quality foster care. The other half remained in institutional care. Foster parents from Bucharest were volunteers who had been intensively screened and interviewed. They were paid a small wage and provided with material support such as toys and diapers. The families were closely monitored by social workers.

Two years into the study they found that across the board, the kids in institutions lagged behind in language development, IQ and mental well being. The prevalence of anxiety and depression were reduced no matter how old the kids were when they were placed in foster care.

They are now about 16 years old. Those in institutions are starting to experience significant mental health issues such as psychotic disorders and paranoia. 20 of them showed a sharp drop in IQ from the age of 12.

One year following this research, the Romanian government passed a legislation banning the institutionalisation of children below the age of 2 years unless they were severely disabled. They also started government foster care.

This is a  classic example of science giving rise to political will to improve lives of kids.
UK’s Child Poverty Action Group reports that 3.9 million children in this country live in poverty at present. This means more than one in 4 children are growing up in families with less than 60% of the median income. In the US, 15 million children live below the poverty line. Western levels of poverty may not be anything close to the hardship endured by many in developing countries but it has long lasting detrimental effects on the physical and mental health of children.
With a strong political will, child poverty can be alleviated but despite setting goals and targets, our government is spectacularly failing to deliver. Dealing with child poverty and its life long consequences is not a matter of political choice but that of moral duty.