In the mid 80s, Dr Vincent Felitti ran an Obesity clinic in America. Many people enrolled and hundreds of pounds were shed by them. But he found that the drop-out rate from his programme was as high as 50% despite good results. He did not understand this and went back to look closely at patient notes.

“I had assumed that people who were 400, 500, 600 pounds would be getting heavier and heavier year after year. In two thousand people, I did not see it once. When they gained weight, it was abrupt and then they stabilized. If they lost weight, they regained all of it or more over a very short time.”

One female patient replied – “Forty pounds” and broke down in floods of tears, “I was four years old.” He found similar common themes emerging from various stories and went on researching this subject for the next 25 years.

The obese people that Felitti was interviewing were 100, 200, 300, 400 overweight, but they didn’t see their weight as a problem. To them, eating was a fix, a solution like IV drug user calls a dose a “fix”.

Eating made them feel better. Eating soothed their anxiety, fear, anger or depression – it worked like alcohol or tobacco or methamphetamines. Not eating increased their anxiety, depression, and fear to levels that were intolerable. For many people, just being obese solved a problem. In the case of the woman who’d been raped, she felt as if she were invisible to men.

Felitti went on to further explore the  impact of childhood trauma on people and coined the term – ACE, Adverse Chilhood Experience. He found a strong co-relation between the number of ACEs and early death. 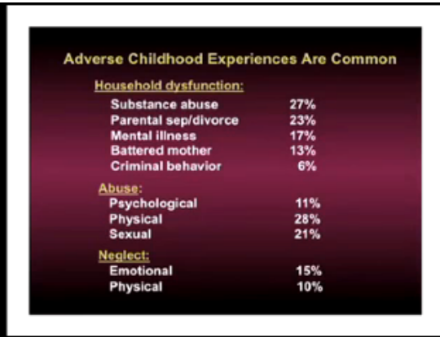 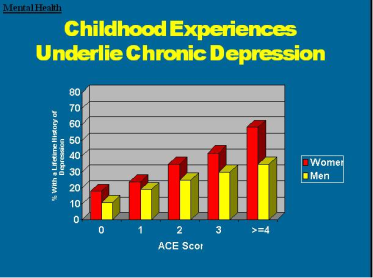