Cricket in the summers and badminton in the winters. That’s what Saagar chose to play during his school years. He was good at both and wanted to be better.

I often went along to watch him play, even though I didn’t appreciate all the technicalities of either game. One evening we gathered in the Sports club to watch him play. I noticed that every time he missed a shot he hit his right leg hard with the badminton racket gripped in his right hand. That must hurt. I didn’t understand. It distressed me. I spoke with him later. “It’s only a game, darling.”, I said. He kept quiet, neither defending his action, nor arguing with me, pointedly focussing on the piece of ground hit by his obliquely downcast eyes.  In him I saw a boy in pursuit of perfection.

Out of the blue he broke up with his lovely girl-friend of 7 months. That too on Valentine’s Day. His first love. Sweet and innocent. On being asked why, he said, ”It’s boring.” Soon after, late one night I gleened tears in his eyes as he hugged me, pretending not to sob. In him I saw a boy, trying to be a man. Oh! The pains of growing!

After a night out with friends, one weekend I noticed a cluster of 3 pea-sized fresh burn marks on his right forearm. Horrified, I asked what happened. He said it was a dare. A few of his friends were being goofy and challenged him to hold the burnt end of a cigarette on his skin and he did. He laughed as if it was a joke. I didn’t know what to make of it. How could this bright kid with an astute sense of right and wrong be talked into this kind of silliness? In him, I saw a boy trying to fit in with his peers.

Was there more to see? Did he tell me everything or just what he thought I could handle? 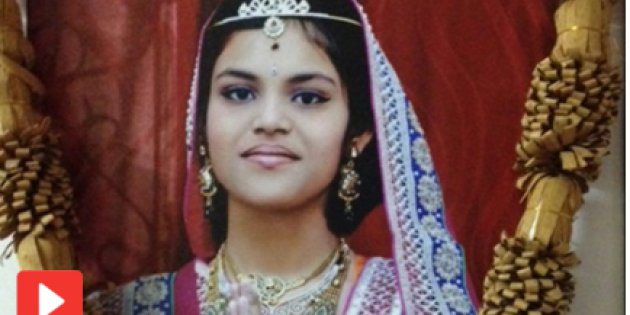 The tradition of fasting to death is called ‘Santhara’. It is glorified in Jainism, an ancient religion of India that teaches a life of renunciation. It usually applies to elderly people who feel they have entered the final phase of life with no meaningful purpose left to fulfil.

Early this month a beautiful 13 years old girl, Aradhna, from a Jain family died two days after fasting for 68 days. She lived only on boiled water for nearly 10 weeks. (http://timesofindia.indiatimes.com/city/hyderabad/13-year-old-Jain-girl-dies-after-observing-68-day-fast-to-bring-good-luck-to-family/articleshow/54750457.cms)

According to the media, her father, a jeweller was in financial difficulty and he consulted some senior Jain monks who came up with the idea of her fasting to get the family out of that situation.

According to her father, it was her wish. She had fasted for 8 days in 2014, for 34 days last year and it ‘suited’ her. She was keen to go further this year. As 68 is an auspicious number in that faith, she wanted to fast for that many days. It was entirely voluntary. The family merely supported her wish.

According to both, the completion of the fast was marked by huge celebrations attended by 600 people. So was her funeral procession. She was anointed as a ‘divine soul’.

According to the hospital, she was brought dead from home. The family’s defense is that she was slowly recovering after breaking the fast gently with fluids and semi-solids but then she suffered a heart attack.

They certainly didn’t know of a condition called ‘Refeeding Syndrome’. When undernourished patients are re-fed there is an increased requirement for phosphate as the body switches back to carbohydrate metabolism, which can be made worse by a background of relative phosphate shortage in starvation. Phosphate levels in the blood begin to fall and mainly affect the heart and brain. So, it is more than likely that her ‘heart attack’ was because of prolonged fasting  followed by unmonitored and inappropriate refeeding. (http://www.gosh.nhs.uk/health-professionals/clinical-guidelines/re-feeding)

Was this a suicide? A murder? Pure ignorance? Superstition? Religious blindness? Lack of common sense? Huge violation of children’s rights?The journey of her soul? Karma? All of the above? What values over-ride the basic instinct of parents to feed their off-springs?

It seems so wrong!

Dr Andrew Curran,  a Paediatric neurologist, tells us about this about the adolescent brain –

Apparently the neurotransmitter Dopamine is responsible for many functions of the brain such as learning, unlearning and paying attention. Its levels are seriously low in Parkinson’s disease. So the brain cells are unable to fire impulses easily. On the other hand, stress can cause high levels of Dopamine causing too many brain cells to fire away randomly causing a chaotic state of mind. A phenomenon known as “Dopamine Surge’ takes place around the time of puberty. This is what causes young people to take high risk decisions with poor judgement. Nature has designed this so as to serve two purposes:

This Dopamine Surge might also be the reason why Bipolar Disorder, Schizophrenia, Depression, Autistic spectrum disorders and addictions reveal themselves most commonly in this age bracket of adolescence/early adulthood.

A few years ago my son seemed exceptionally pleased when he came home from school one evening. It was at the height of winters and snow had been falling for a few days. “As I walked past a few boys throwing snow balls at passers by,” he said, ”one of the boys asked his friends if he should throw a snow ball at this ‘man’. They thought I was a man!” He beamed with joy.

He was my child-man. Couldn’t wait to grow up!